Zeke reporting!  Normally we don’t post on Thursdays but we are all house-bound!  The air quality is SO bad from the wildfires in Oregon and British Columbia blowing over us we can hardly see or breathe!  Greg got hit the worst!  He’s hacking too! Here is a photo from Tuesday on the way to the Ford dealer for warranty service.  That thing in the left corner is the sun!  Looks like we are on Venus!

Anyway, a funny thing to show you from the waiting room.

Greg was watching this home renovation program, when his eyes moved down to the sign pasted on the wall below the tv set. 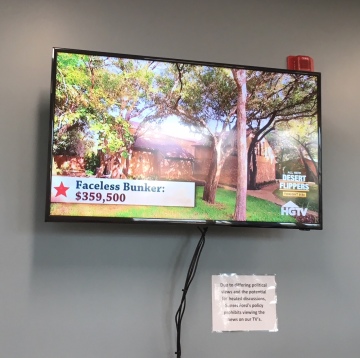 He looked closer and read this!

For those of you who like “true crime”, the serial  Cat Killer struck again Wednesday in the same public park he has killed in before!  The reward as of 15 August 2018 is now up to $21,000!  The victim was a white and black kitten.

Due to the Cat Killer and the foul air, the Catio is closed.

I put the “Likes” back on the pages and new posts for everyone, though Greg was not thrilled about it,  if you haven’t noticed.

I also wanted to point out that we as policy do not reblog, press, or link to other blogs, with the only exception being Spike the Scottish Black Cat.

If you are new or haven’t been paying attention, to find out why  read about Christine & Greg

It is warm and the house is closed to keep out the stinking air.  Headache is one thing people get breathing it, and Greg has a whopper that just won’t quit!  Greg made us promise we wouldn’t eat his face until last if he dies, and we all agreed except Opie.  Greg watched the news this morning and discovered you can make your own HEPA air filter effective to 95% just by taping a new furnace filter to the FRONT of a fan!  The air gets sucked thru the back and filtered as it blows out the front!

Scooby is bored and is trying hard to amuse himself. I will chase him later.  That’s all the news. [Zeke Editor in Chief]